Lovejoy and Bouwkamp Win Silver and Bronze at Wheelchair Worlds 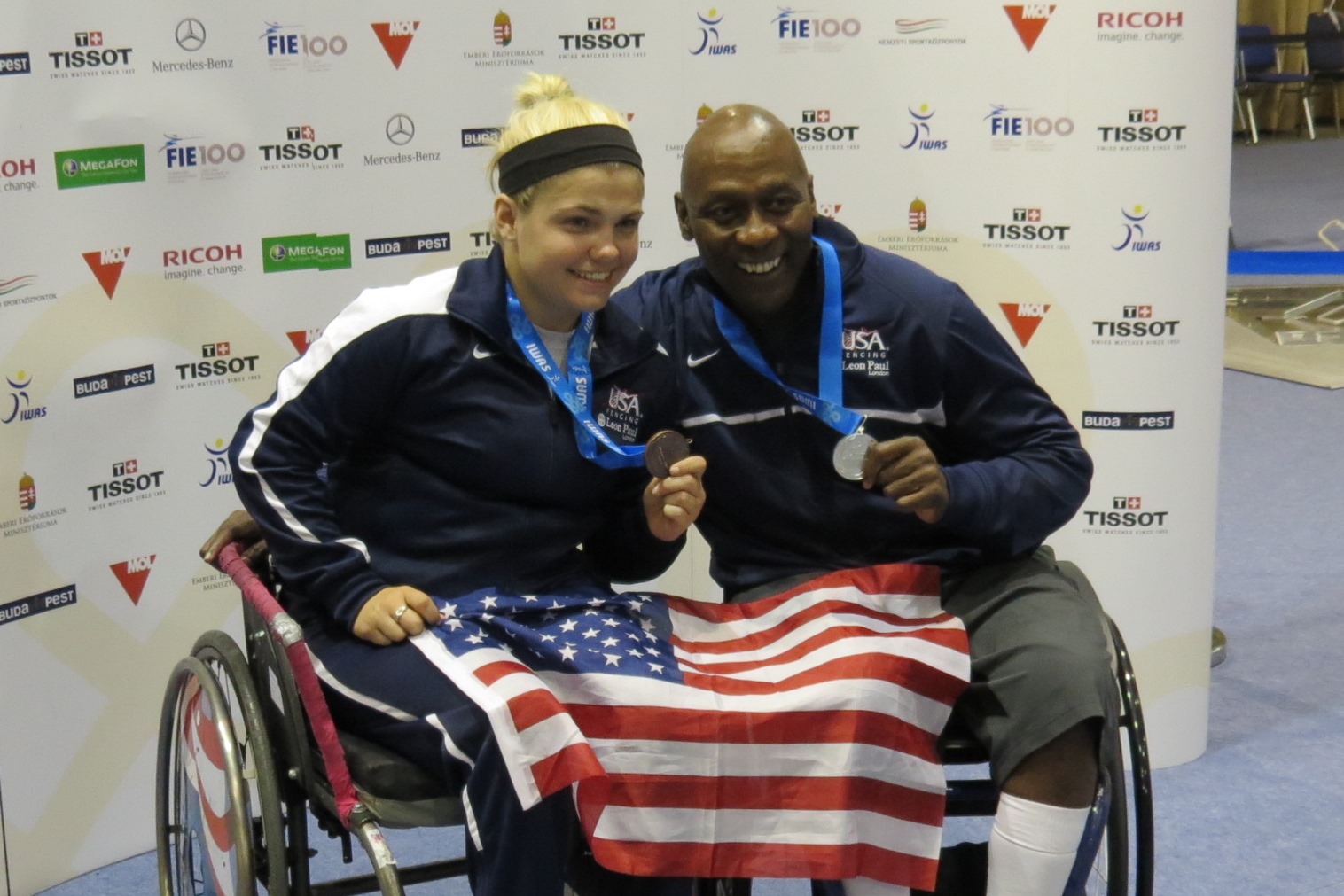 Lovejoy, a Sydney Paralympian, returned to international competition this season to pick up where he left off.

At 56-years-old, Lovejoy was one of the oldest members of Team USA in Budapest and it was the youngest – 17-year-old Cat Bouwkamp (Fishers, Ind.) – who also brought home hardware for the Americans.

Lovejoy entered the Category C epee quarter-finals on Aug. 8 as the sixth seed after a 3-4 pool result and would fence William Russo – the Italian who knocked him out of the epee quarters at the World Cup in Poland last month. Russo led the bout, but Lovejoy pulled off a late comeback to take the win, 15-13.

“I kinda got mad. I thought about the guy I was competing against and how I lost to him in Poland last time and I thought ‘No, I’ve gotta take this,’” Lovejoy said of his come-from-behind win.

After a comfortable 15-8 win over second seeded Oleksiy Sundiyev in the semifinals, Lovejoy trailed Russian Alexander Logutenko in the gold medal final, but fought back to tie the bout in the final seconds at 11 touches each.

The bout went into sudden death overtime where Logutenko scored the final touch to take the win, 12-11.

“I missed some opportunities along the way, but I knew I needed to make sure that I used a lot of power and I knew I’d be able to come back. I just lost in priority. Most of the time it’s a distance game and running out the clock is how I like to play anyway. It turns out that I didn’t win it, but that’s ok. It was just one last touch,” Lovejoy said. “There’s been a lot of pressure put on me this year. I came back the first of the year and I said that I wanted to try to win the gold medal. And it’s been through the collective support of a lot of people that was able to do this – of [Coach] Julio [Diaz] and of Maestro [Les Stawicki]. And plus, to be here at 56-years-old and win at World Championships is just amazing.”

Lovejoy and Logutenko met up again in the foil event where the Russian took the win, 15-12, in the quarter-finals on his way to win gold.

Although Bouwkamp missed the cut out of pools by just two touches in the Category A epee competition, she returned the next day to fence in the Combined Category saber competition.

Bouwkamp, who was a nationally ranked able-bodied saber fencer until she was 12, added epee to her repertoire when she began competing in wheelchair fencing since women’s saber is not on the Paralympic program.

“I came out of epee not being happy with where I was in the standings and I knew saber, obviously, is my weapon and I wanted to show them that I could come back and what I could do with my own weapon,” Bouwkamp said.

Seeded fourth out of the pools, Bouwkamp earned a bye into the quarter-finals where she edged Marta Fidrych (POL), 15-13.

In the semifinals, Bouwkamp faced Ukrainian Natalia Morkvych who controlled the bout to take the win, 15-5.

The win is the first Wheelchair World Championship medal for a U.S. women's saber fencer and the high school senior was the youngest athlete on the podium.

Two of Bouwkamp’s teammates from the London Games each placed in the top eight in Budapest.

Ryan Estep (Florence, Miss.), a seventh-place finisher at the 2011 Wheelchair World Championships, finished seventh in Budapest in the Category B men’s epee event. Seeded sixth out of the pools, Estep defeated Vanderson Chaves (BRA), 15-6, in the table of 32 and won his table of 16 bout against Andrei Pranevich (BLR), 15-12. One win away from a bronze medal, Estep lost his quarter-final bout to Amar Ali (IRQ), 15-7.