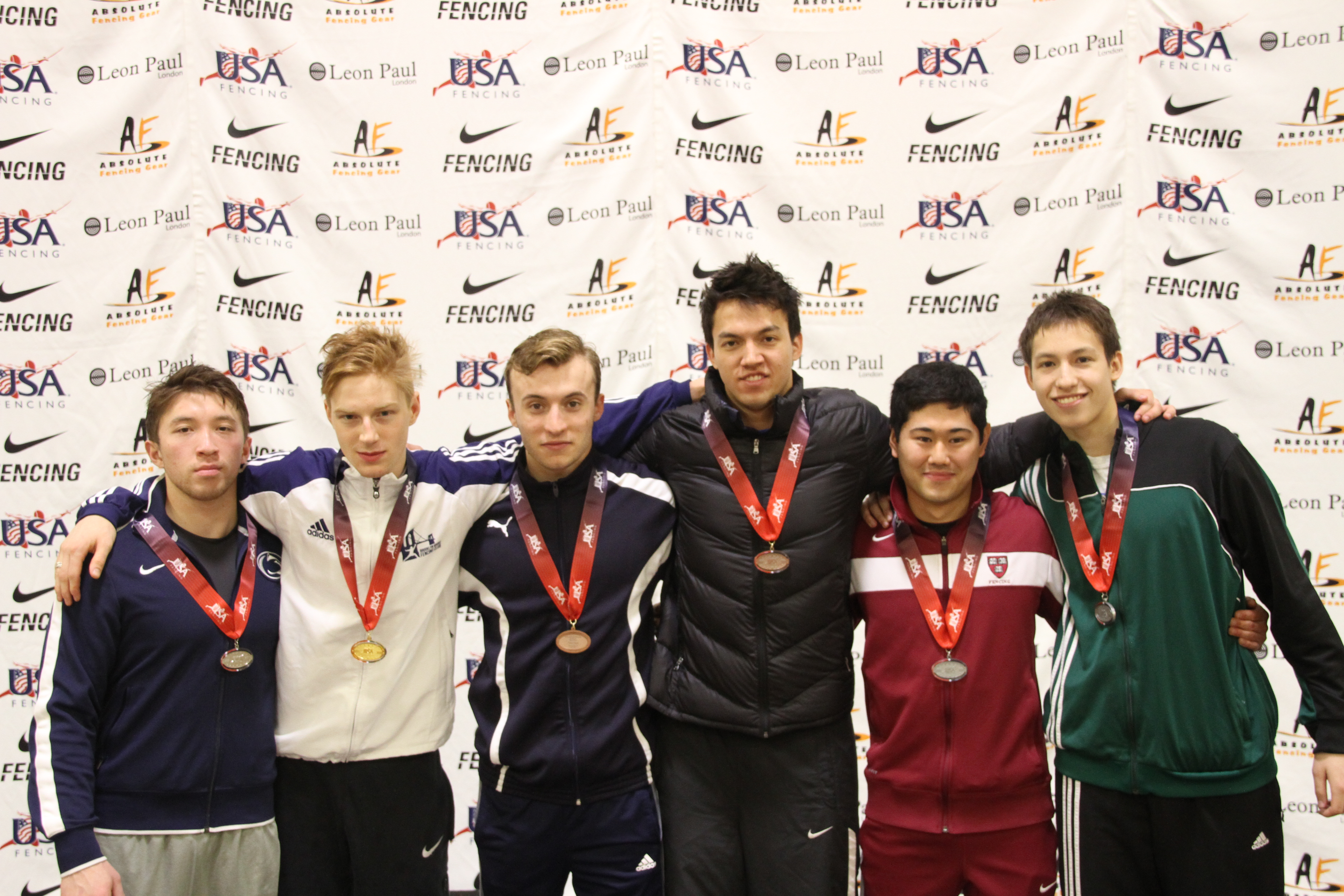 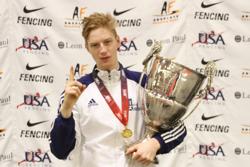 Seeded third out of the pools, Imboden won his table of 32 bout against Alex Chiang (Atlanta, Ga.), 15-9.

Cadet fencer Geoffrey Tourette (Cupertino, Calif.) got as close in score as any fencer would to Imboden, but the Olympian came away with a 15-12 victory.

After a 15-9 win against Adam Mathieu (Union City, N.J.), Imboden advanced to the semifinals against Michael Dudey (Bellaire, Texas) – the Princeton sophomore who won gold at the Junior World Championships with Imboden in 2012.

Imboden burst out to a 6-1 lead and was up, 14-3, at the break. Imboden needed just five seconds in the next period to finish with a 15-3 victory.

While Imboden took a 9-3 lead early in the bout, Willette scored three straight to cut Imboden’s lead to 9-6.

Those three scores would be Willette’s last, however, as Imboden earned six straight touches to win the bout, 15-6, in less than two minutes.

“I’m really good friends with David and we’ve fenced a lot over the years. He’s a great competitor and it’s always an honor to get en garde with someone who’s working really hard and been around the circuit, so it was an awesome bout,” Imboden said.

This is Imboden’s first return to the Division I Nationals since winning the event as an 18-year-old in 2011.

“I’ve been training really hard and to be able to put everything together is an amazing feeling,” Imboden said. “I’m putting in the work now and I think my fencing has taken another jump recently, level-wise. I expected to come here and dominate and that’s what I did.”

Although Imboden’s goal was to win Nationals, he said his focus is always on the international scene where he will return to the World Cup circuit in Korea in two weeks..

While much has changed for Imboden over the last year, the greatest may be his switch to train with 2004 Olympian Dan Kellner (Brooklyn, N.Y.)

“It’s been the classic ups and downs of switching coaches. It’s completely different. I spend every day with this guy and he’s teaching me things and now I’m spending every day with a new guy and he’s teaching me something completely different. It can be frustrating,” Imboden said. “Fencing is a lot about finding yourself in situations and coming back to the things that you’ve learned without even thinking about it. You can think about it, you can be as premeditated as you want, but really, when it comes down to it, it’s those things where it just happens. So when you start changing pieces around, all of a sudden the little things aren’t there anymore and it makes it extremely difficult to find yourself and find confidence in your fencing.”

One of the things Kellner stresses is the importance of both mind and body in fencing.

“This tournament comes right before the Asian circuit, so we talk about it as ‘training through.’ So you want to make sure your body is completely ready for a tournament both mentally and physically. That means breathing. That means having your body at complete rest. That means understanding your body,” said Imboden who is known for both his physical and mental strength as a competitor. “it’s just about being in control and understanding your body and listening to your body and it helps in every aspect. If you know how to breathe well, that means that if someone else is tired, you’re not. If you know how to listen to your body, it means that you’re not going to get injured because you’re not going to overdo it or underdo it.”

Imboden has three more tournaments on the World Cup circuit to finish out the season before the Pan American Championships are held in June and then Imboden will begin final preparations for the Senior Worlds where he will fence with a U.S. team that won silver last year. Individually, Imboden placed in the top 16 in 2013 and top eight in 2011, but has his eyes on his first individual podium finish at the event.

“Results-wise, I’ve seen improvement, but the biggest thing is getting back to the fencing I want to be doing and the level I want to be at and the detail and complete control and that comes from a lot of things – physically, mentally, change of coach,” Imboden said. “All that stuff really has to come together for you to perform at the highest level. I would say I’ve seen the pieces and they’re sort of floating around and they’re starting to come closer and closer and closer. My results are decent, but I’m looking for that last push and I know it’s coming soon.”

In addition to individual events, the Division I Nationals also includes team competitions and a trio of squads from New York swept the senior men’s epee team event.

NYAC Red built a four-touch lead at 38-34 going into the final bout between NYAC’s Alen Hadzic (New York, N.Y.) and Yeisser Ramirez (Bronx, N.Y.) Although Ramirez outtouched Hadzic, 10-7, it was too late for his team to recover and NYAC won the match, 45-44.

Wheelchair fencer David Xu (Staten Island, N.Y.) entered his first Nationals this weekend and found himself being crowned as the new Wheelchair National Champion after he upset 2012 Paralympian Ryan Estep (Florence, Miss.), 15-14, in the epee competition.

Competition also was held in Minneapolis in non-championship events at the April North American Cup.

Featuring  both age group and open veteran events, the April NAC is the second of three qualifying events for the 2014 Veteran World Championship Team.

With two of the three qualifying events for the 2014 Veteran World Championships now in the books, veteran +70 saber fencer Ray Sexton III (Round Rock, Texas) qualified for his 12th straight team when the 10-time medalist defeated 2011 Veteran World medalist John Terninko (Nottingham, N.H.), 10-7, in the gold medal final to earn his second NAC win of the season.

Lynn Botelho (Indiana, Pa.) continued her bid to qualify for a second Veteran World Team with a gold medal win in the veteran women’s 50-59 foil event where she won her final bout against Viveka Fox (Virgennes, Vt.), 10-6.

Four veteran competitions were held in events which aren’t on the Veteran World program.

A bronze medalist at the 2013 National Championships, veteran 40-49 men’s saber fencer Sergey Makogon (Sandy, Utah) claimed his first NAC gold on Friday. Makogon led the final bout, 9-6, in the second period, but Tony Jochaniewicz (Oak Park, Ill.) fought back to score two and come within a touch of a tie. Makogon scored the final touch to win the bout, 10-8.

Three-time Veteran World Champion Jane Eyre (Swedesboro, N.J.) has been undefeated in both domestic and international competition since March of 2013 – a streak she continued on Friday with a gold medal win in the veteran open women’s saber event. Seeded sixth in the direct elimination tables, Eyre advanced to the finals where she defeated 2012 Veteran World medalist Chaz Smith (Placerville, Calif.), 10-6.

The first veteran team title of the weekend was awarded to The Needles who defeated the West Coast Tsunami, 45-38. Candlewood Coyotes took the bronze, 45-32, over West Rock.