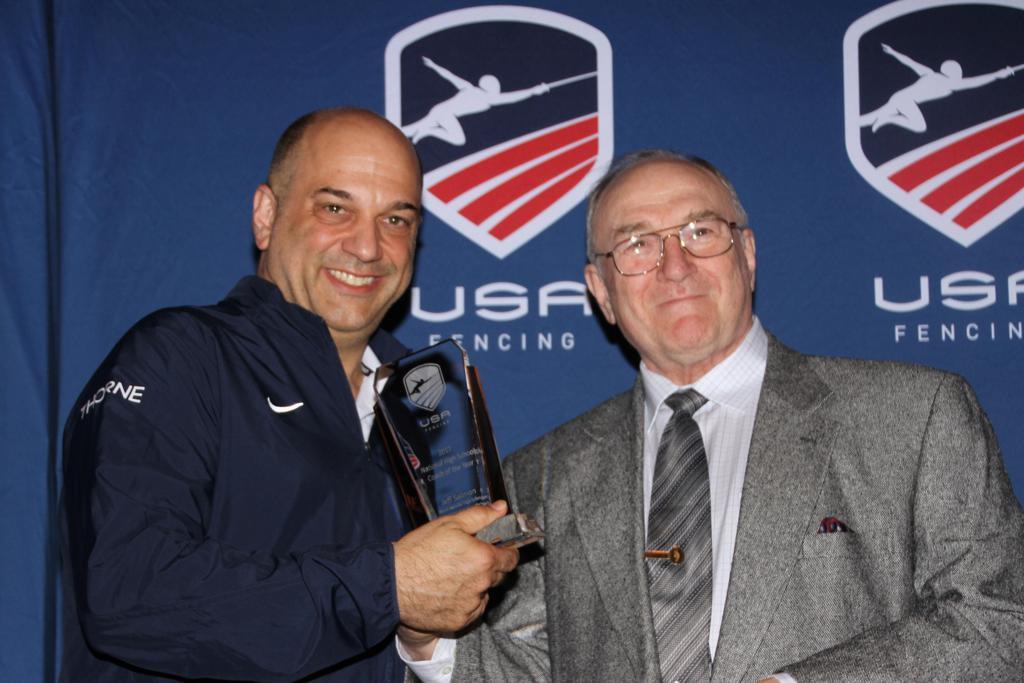 Jeff Salmon (left) was presented the first ever High School Coach of the Year Award by his college coach at Penn State, Emik Kaidanov (right).

In the award’s first year, Salmon was one of 18 individuals nominated from six states. The winner was chosen based on the athletic accomplishments and success of the program during the 2016-17 season, including overall record, postseason achievements and individual recognition given to members of the team.

“Not everyone is going to be an All-American. Not everyone is going to be an Olympian. But what we do as high school coaches is take kids that have their hat over their head and their hands in their pockets and we help them stand up straight, be confident in themselves,” Salmon said after receiving the award which was presented to him by his college coach at Penn State, Emik Kaidanov (State College, Pa.) “This sport is hard – really, really hard. Parents really need to understand how hard this is: mentally, physically. And that little success they had makes them the men and women they become, gives them the confidence to go on in life, whether they achieve great things in fencing or just get that E that they’ve been wanting so hard.”

Salmon founded the team at Ward Melville High School in 1995 before it became a varsity sport in 1999.

Now coaching at the school for more than 20 years, Salmon led this season’s team to a perfect 15-0 overall and 14-0 league record.

The Suffolk County, Huntington Relay and Long Island Team Champions, this season marked the 10th straight year, and 12th overall, that the Patriots have had an undefeated season and won the league, county and Long Island Championships.

Under the helm of the seven-time Suffolk County Coach of the Year, the boys team has now won 158 consecutive dual meets, a streak dating back to the start of the 2007-08 season that is now a Long Island boys’ fencing record.

“Statistically, we were able to accomplish a perfect season for both the boys’ and the girls’ teams,” Salmon said. “We've had seasons like this before, but each year it gets tougher to come out on top. This time around we had three meets come down to the last bout. The clutch performances that happened at that time and the full support of the kids and parents for the team I'll never forget.”

“Jeff is a wonderful mentor to his team and teaches lessons that extend beyond the strip. They are known not only for their excellence as fencing athletes but for their sportsmanship,” said Peter Melore (Setauket, N.Y.), the director of athletics at Ward Melville High School. “Jeff demands dedication, discipline and maintains an outstanding focus on team. Through a rare combination of humor and intensity, he instills in them that nothing beats hard work and that momentary failures set you up for greater success.”