U.S. Claims 20 Medals on Day Three of Pan Am Youth and Veteran Championships 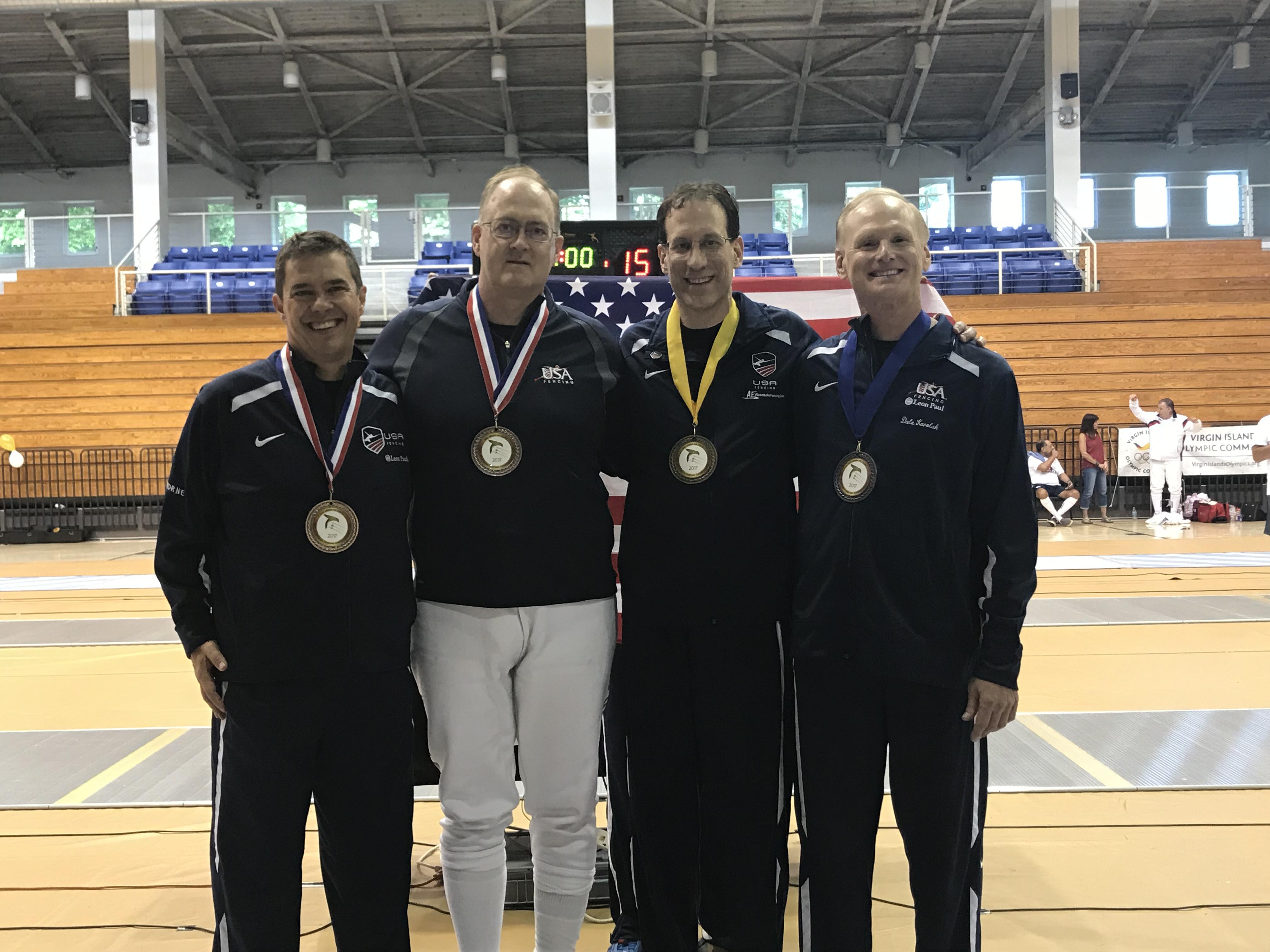 (Colorado Springs, Colo.) – Team USA came away with another 20 medals on the third day of competition at the Pan American Youth and Veteran Championships in St. Thomas on Thursday.

Sweeping the medals in three of the seven categories and earning 20 of the 28 possible medals, the Americans have now accumulated 64 medals with two days left in the tournament, only 18 fewer than last year’s record mark of 82.

Team USA’s veteran fencers won 13 of the 16 medals on Thursday, including all four golds as the U.S. has claimed all 12 titles in the veteran categories so far.

Feldman went 6-0 to earn a bye into the semifinals. His opponent was Mahnken, who defeated David Hueske (Charleston, S.C.) in the quarter-finals to guarantee a medal. Feldman won, 10-3, and bested Karolak in the final, 10-7, for his second championship.

Karolak and McIntosh both advanced directly into the semis out of pools and in a head-to-head match-up, Karolak controlled the bout, 10-4.

Berardi outscored El-Saleh in the semifinals, 10-4. On the other side of the bracket, Gutkovskaya’s semifinal bout went down to the final touch with Gutkovskaya coming up short, 10-9.

In the final against Cledola Tello (BRA), Berardi won on priority after a 1-1 deadlock through regulation and overtime.

On the men’s side, the Veteran 2 epee competition saw Robert Mones (North Charleston, S.C.) stand on the top step of the podium after just out-touching his teammate Brent Myers (Fort Myers, Fla.) in the final, 10-9.

Mones reached the final with a 10-7 victory over Russell Carver (PUR). Before earning the silver medal, his second of the competition after earning bronze in Veteran 2 men’s saber the day before, Myers posted a 10-8 win against Bom Percy (CHI).

Wilkerson finished 5-0 in pools to earn the No. 1 seed in the semifinals, where she cruised past Deane, 10-2. Competing for the championship, Wilkerson faced Diegel, who had held off Dunn, 10-5, in the semis.

Wilkerson proved too much for her teammate and took the bout, 10-4.

The U.S. had just one competitor in the Youth A men’s saber competition: Jayden Hooshi (Old Westbury, N.Y.)

Chusid defeated Bianca Santa (PUR) in table of 16, 10-3, and Katiria Diaz (PUR) in quarter-finals, 10-6, to secure a medal. En route to gold, Chusid then had to go through two teammates, stealing a one-point victory over No. 1 seed Batra, 10-9, before overpowering Petvzner, 10-3, for the gold.

After Pevzner advanced to the quarters with an easy 10-2 victory over Simone Combatti (CHI), she reached the podium with a 10-5 win over Alexandra Nikolic (Naples, Fla.), who had earned a dominant victory over Sofia Jimenez (CHI) in the previous round. In the semis, Pevzner secured a close 10-8 win.

Batra also earned a quick 10-1 victory in the 16 over Joelys Rivera (PUR) before securing a semifinal berth with a 10-6 win against Sohah Kulkarni (Howell, N.J.)

Niebergall went 5-0 in pools to earn a bye to the quarter-finals, where defeated Martin Guerra (CHI), 15-4. In the semifinals, he prevailed over Benjamin Carrasco (CHI), 15-7, before handing Lucas Busnardo (BRA) a 15-9 loss to win the championship.

Wimmer also moved directly into the quarters after pools. He outscored Nicky Wu (BRA), 15-13, but then dropped the semifinal bout to Wu’s teammate Busnardo, 15-9.

Busnardo also eliminated Silvers, who missed a chance at a medal with a 15-10 loss in the quarters and took fifth.