US Fencing Hall of Famer Herb Spector Passes Away at 98 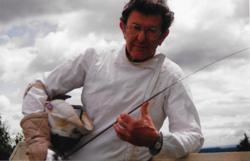 (Colorado Springs, Colo.) – The fencing community lost a key member last month as Novera Herbert Spector (Carlsbad, Calif.) passed away on Nov. 15 at the age of 98.

A member of the US Fencing Hall of Fame, Spector was not only an accomplished fencer himself, but helped grow the sport.

He founded the Washington Fencing Club as well as the NIH Fencing Club, and played a large role in the creation and development of the Birmingham Fencing Club.

Spector was an active fencer for over 60 years, beginning in college and continuing until he was 90 years old. He also coached throughout his life.

While Spector fenced all three weapons over the course of his career, saber was his favorite, claiming 22 veteran saber age category titles and three veteran open saber championships.

Born in 1919 in Cincinnati, Ohio, Spector earned his PhD in physiology from the University of Pennsylvania in 1967.

During his career, he earned many awards for his leadership in the field of Neuroimmunomodulation, which explores the effects of the nervous system on the immune system via neural, hormonal and paracrine actions.