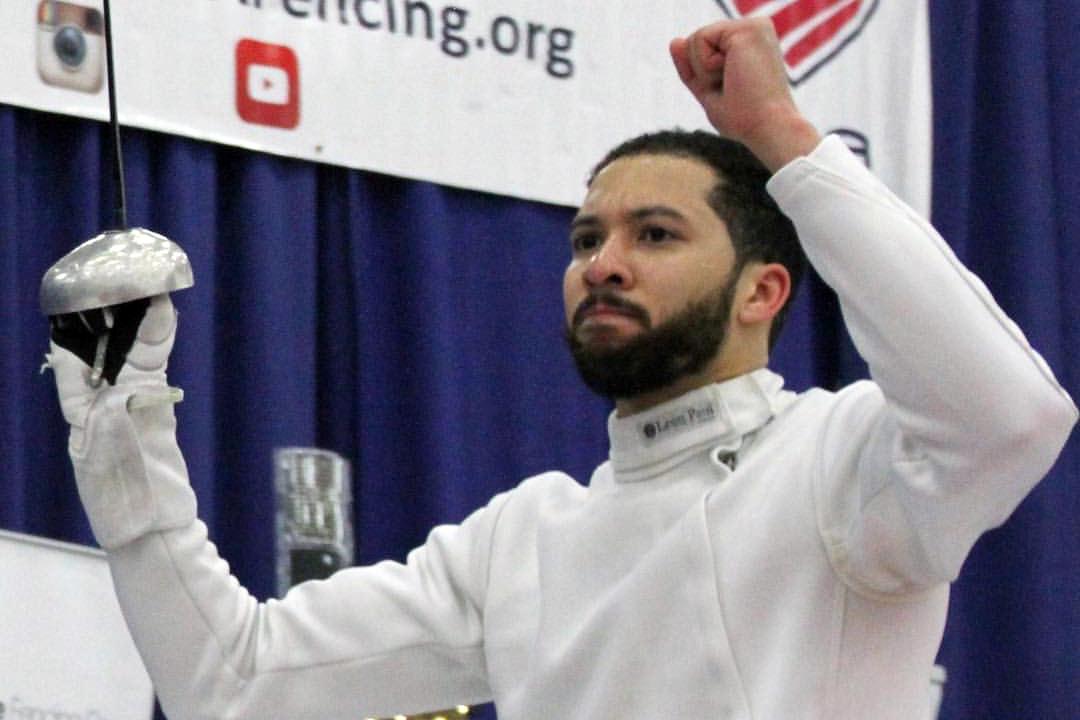 (Colorado Springs, Colo.) – The best fencers in the nation will go for gold in Richmond, Va. at the Division I / Wheelchair National Championships and April North American Cup from April 20-23.

Competition will be held daily from 8 a.m. – 8 p.m. at the Great Richmond Convention Center. Each day’s action will feature a finals block with medal matches for Division I individual events and gold medal finals for select Wheelchair events.

The Division I National Championships will include both individual and team competitions in all three weapons and will serve as the final qualifying tournament for the 2018 Senior World Championships, to be held in Wuxi, China from July 19-27.

Division I fencers will have the opportunity to earn national ranking points in Richmond with the top four athletes on the USA Fencing National Team Point Standings in each weapon at the conclusion of the Division I Nationals qualifying for individual positions at Senior Worlds.

The following is a preview of the Division I and Wheelchair fencers to watch in the individual events in Richmond:

Division I Men’s Epee
Potentially the event with the most on the line in Richmond, the Division I men’s epee competition will have a large impact on World Team selection. With the top three spots on the team already locked, approximately 12 fencers could be in the mix for the fourth position on Team USA. Although they have already mathematically secured their positions on Team USA, Jake Hoyle (New York City, N.Y.), Curtis McDowald (Jamaica, N.Y.) and Rio Olympian Jason Pryor (South Euclid, Ohio) will each be among those vying for the National title. While Pryor won the 2015 Division I Nationals, Hoyle is seeking to improve on his fifth place finish in 2017. A 2016 Junior World Team member, McDowald earned two silver medals at North American Cups last season, but will be aiming for his first podium at the Div I Nationals. The remainder of the contenders for the final position on Team USA include five past Senior World Team members. A 2012 Senior World Team Champion, Ben Bratton (New York City, N.Y.) is seeking to qualify for his 10th Senior World Team and successfully defend his 2017 Division I National Championship. Alex Tsinis (Little Neck, N.Y.) won back-to-back National Championships in 2012 and 2013 en route to qualifying for his first Senior World Team in 2013. Yeisser Ramirez (Brooklyn, N.Y.) also used a gold medal win at Nationals as a stepping stone to later team qualification, winning the 2014 title before fencing at the 2015 Senior Worlds. Adam Rodney (New Orleans, La.) won bronze at the 2011 Championships and represented Team USA at the Senior Worlds in 2017 with Bratton, Pryor and Cooper Schumacher (Jamaica, N.Y.) who also is in the running for this year’s Senior World Team. All current or former Junior World Team members, the winners of the first three North American Cups this season will each be ones to watch in Stephen Ewart Jr. (Lancaster, Calif.), Jonathan Piskovatskov (Houston, Texas) and James Kaull (New York City, N.Y.). Lewis Weiss (Houston, Texas), Dennis Kraft (Bloomfield, N.J.), Teddy Lombardo (Mount Kisco, N.Y.) and Samuel Koch (San Francisco, Calif.) also have potential to break through to qualify for their first Senior Worlds.

Division I Men’s Foil
Last year, Nick Itkin (Los Angeles, Calif.) dominated the Division I circuit, winning four straight events, including the 2017 National Championships as a 17 year old. Although Itkin, who won gold at Junior Worlds earlier this month, will be mathematically ineligible to move from his current position of fifth to fourth in the rankings, he could make history as the first men’s foil fencer to win back-to-back Division I National Championships since Gerek Meinhardt (San Francisco, Calif.) did so in 2007 and 2008 prior to qualifying for three straight Olympic Teams. The four positions on the 2018 Senior World Team have been locked by 2016 Olympic team bronze medalists Meinhardt, Alex Massialas (San Francisco, Calif.), Race Imboden (Brooklyn, N.Y.) and Miles Chamley-Watson (New York City, N.Y.) With the Olympians not competing in Richmond, the field of potential champions remains open. Sam Moelis (Hewlett, N.Y.) won gold as a 16 year old in 2015 less than two months before earning the Cadet World title. Geoffrey Tourette (Cupertino, Calif.), who won Cadet Worlds in 2016, took the Division I gold at the NAC in January while Sidarth Kumbla (San Jose, Calif.) and Kenji Bravo (San Francisco, Calif.) won silvers at the October and January NACs, respectively. Itkin, Moelis, Tourette and Kumbla won Junior Worlds together as a team in 2017 and Itkin, Tourette, Kumbla and Bravo followed with a team bronze at this year’s Junior Worlds. Adam Mathieu (Brooklyn, N.Y.) also will be a top contender after his silver medal finish at the July Challenge.

Division I Men’s Saber
Rio Olympic silver medalist Daryl Homer (Bronx, N.Y.) earned his first Division I National Championship in 2017, defeating 2017 Senior World Team member Geoff Loss (Laguna Beach, Calif.) in the finals. This year, Homer will return to defend his title and Loss will be one of four fencers aiming to qualify for the fourth position on the 2018 Senior World Team with the first three spots locked by Olympians Homer and Eli Dershwitz (Sherborn, Mass.) as well as 2014 Senior World Team member Andrew Mackiewicz (Westwood, Mass.) Neither Dershwitz nor Mackiewicz, who are finishing their semesters at Harvard and Penn State, respectively, will fence Richmond, but the race for gold will be an intense one with two-time Junior World Team member Ben Natanzon (Manalapan, N.J.) opening the event as the No. 4 fencer as the one his opponents are looking to pass in the standings. London Olympian Jeff Spear (Wynantskill, N.Y.) won back-to-back National Championship titles in 2015 and 2016, defeating Homer in the finals to take his second gold. Spear has fenced on the last four Senior World Teams with Homer and Dershwitz, including the 2017 event where the Team USA took fourth. Peter Souders (Silver Spring, Md.) is looking for a position on is third Senior World Team after representing Team USA In 2015 and 2016. A bronze medalist at the 2017 Division I Nationals, Souders, has placed in the top eight for the last four years.

Division I Women’s Epee
Between 2004 and 2017, London Olympic medalists Kelley and Courtney Hurley (San Antonio, Texas) have won 10 individual Division I National Championships with five each and Kelley as the reigning National Champion. The Hurleys recently locked positions on their 11th Senior World Team together as the top two fencers in the nation with their Rio Olympic teammate Kat Holmes (Washington, D.C.) mathematically guaranteeing the No. 3 spot and qualification for her fifth Senior World Team. The race for the fourth position will come down to two fencers each looking to qualify for the Senior Worlds for the first time. Natalie Vie (Phoenix, Ariz.) currently holds the fourth position after a season that included a pair of silver medal finishes at the December and January NACs as well as top-64 results in each of her three international appearances. Amanda Sirico (Bowie, Md.) only fenced in two international events, but earned a top-32 result in Tallinn in October and took second at the NAC in the same month.

Division I Women’s Foil
Since winning her first National title as a 16 year old in 2010, Margaret Lu (Greenwich, Conn.) has been on a mission to set new records. After winning her sixth Division I National Championship in 2017, Lu has the potential to become the first U.S. woman ever to win five straight, passing the record set by Adeline Gehrig from 1920-23. With her top-32 result at the Absolute Fencing Gear® FIE Grand Prix Anaheim, Lu earned a position on her fifth Senior World Championship Team. Lu will fence in Wuxi with all three of the athletes with whom she won silver in the team event in 2017: two-time Olympians Lee Kiefer (Lexington, Ky.) and Nzingha Prescod (Brooklyn, N.Y.) and 2012 Olympian Nicole Ross (New York City, N.Y.) Prescod, who is scheduled to fence in Richmond, previously took gold at the Division I Nationals in 2015 and won the 2017 July Challenge to open the 2017-18 season. Both four-time Junior World medalists, Iman Blow (Brooklyn, N.Y.) and Jackie Dubrovich (Riverdale, N.J.) are ranked fifth and sixth in the nation with Dubrovich entering the competition as a two-time silver medalist from the 2016 and 2017 Div I Nationals.

Division I Women’s Saber
The Division I Nationals will mark the second foray back into competition for two-time Olympic Champion Mariel Zagunis (Beaverton, Ore.) since she took much of 2017 off to give birth to her daughter, Sunday Swehla. Less than six months after becoming a mother, Zagunis returned to the international circuit at the Seoul Grand Prix where she placed eighth earlier this month – matching her top-eight result from the 2017 season. For Zagunis, this event will be her first Division I Nationals since winning bronze in 2008 – the same year she went on to win her second Olympic gold. Three of the four athletes who have clinched their spots on the 2018 Senior World Team will be there to challenge Zagunis with only Rio Olympic team medalist Dagmara Wozniak (Avenel, N.J.) not scheduled to compete. Rio Olympic team bronze medalist Monica Aksamit (Matawan, N.J.) and 2018 Junior World team silver medalist Chloe Fox-Gitomer (Portland, Ore.) are each poised for a shot at a first National Championship. Eliza Stone (Chicago, Ill.) earned gold at the 2013 Division I Nationals and is one of four past Div I National Champions in the field, including Kamali Thompson (Teaneck, N.J.) who won gold in 2016 as well as 2014 National Champion Celina Merza (Wayne, N.J.) and 2012 National Champion Francesca Russo (Wayne, N.J.)

Brinson, who fenced saber at the 2012 and 2016 Games, holds National Championship titles in both epee and saber, winning epee gold in 2015 and saber titles in 2012 and 2016. This year, Brinson will be aiming for his third career saber title and his first in foil.

De Mello represented Team USA at the 2008 Paralympic Games after fencing three previous Games for Brazil, but will be fencing for a chance at her first U.S. National title.

Melissa Chandler (Salt Lake City, Utah), who is aiming to qualify for her first Paralympic Team in 2020, is the defending Wheelchair National Champion in all three weapons after sweeping the epee, foil and saber events at her second ever Nationals in 2017.

In addition to the National Championship events, the April North American Cup will include events for Division II, Division III and Veteran fencers.

Veteran events will be held for the 40-49, 50-59, 60-69 and +70 age categories as well as the Veteran Open event for athletes in any Veteran age category. For the second time this season, +80 exhibition events also will be held at the NAC.

The veteran age group events will be the second of three opportunities this season for athletes age 50 and older to qualify for the 2018 Veteran World Championship Team.

Among the athletes fencing in the veteran competitions are the following individual medalists from the 2017 Veteran Worlds: