Mariel Zagunis Returns to Competition with Motherhood as New Motivation 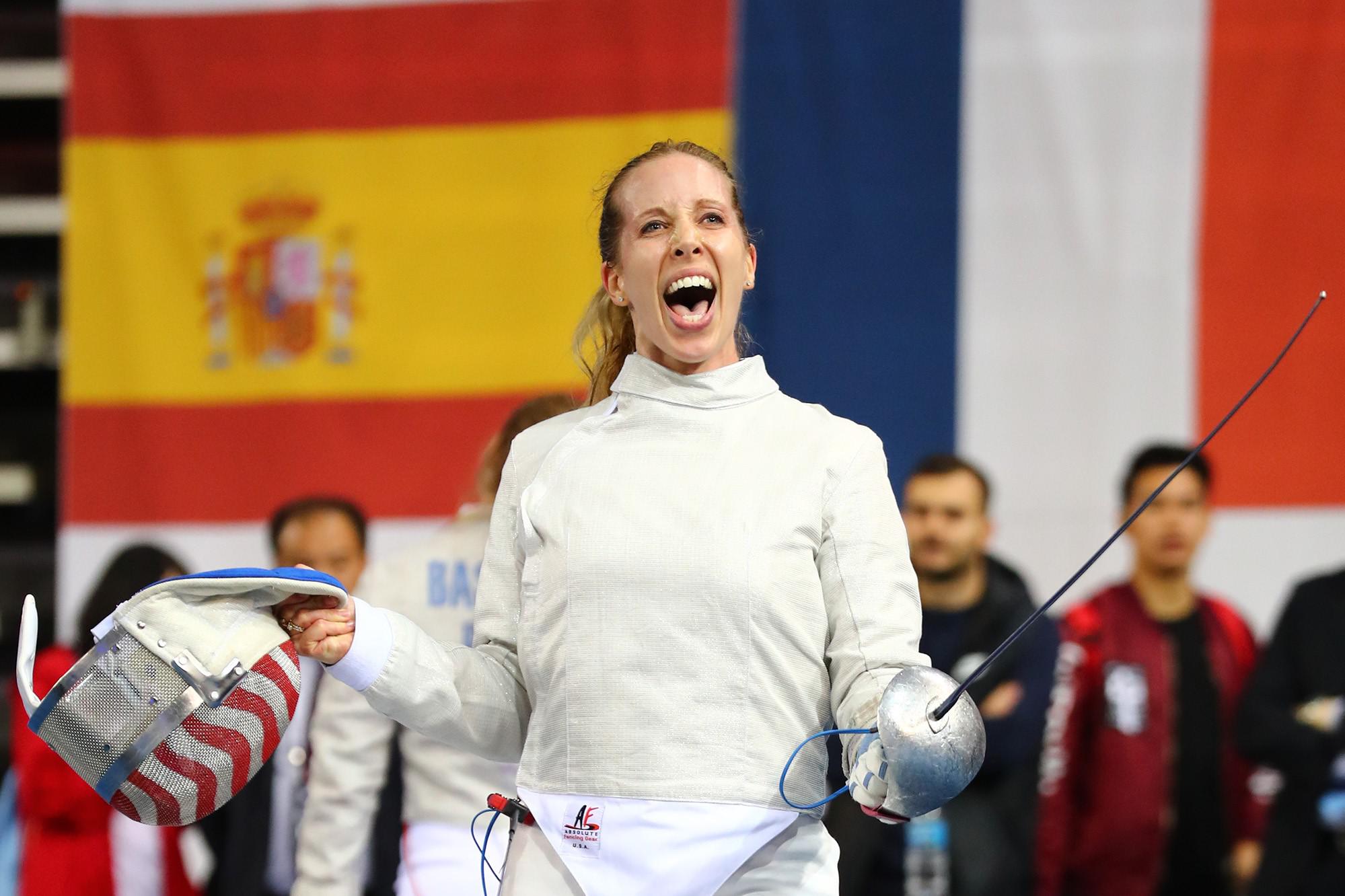 Mariel Zagunis returned to international competition at the Seoul Grand Prix and will compete at the Division I National Championships in Richmond this weekend. Photo Credit: Devin Manky / FIE 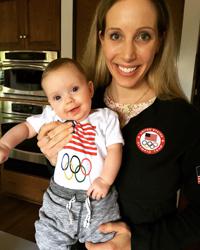 In the span of a year, so much has changed for Mariel Zagunis.

And yet so much has stayed the same.

In the span of a week last spring, Zagunis won bronze at the Yangzhou World Cup and claimed an eighth-place finish at the Seoul Grand Prix.

Though only Zagunis would know it at the time, the Grand Prix in April 2017 would be her last tournament of the year as she was in her first trimester of pregnancy.

“I wanted to make the most of it because I knew that it was going to be my last competition for a little bit,” Zagunis said. “It’s so much more difficult when you’re a female, whether or not you’re a professional athlete, as far as choosing family or career, but it was something that was time sensitive and something that we really wanted so it was like ‘well we’re going to do it and we’re going to figure it out along the way.’”

Throughout her pregnancy, the two-time Olympic Champion continued to take fencing lessons from Ed Korfanty in Portland, Ore. The two have trained together for more than 20 years with Korfanty coaching Zagunis and the U.S. Women’s Saber Team at the last four Olympic Games.

The fierce training she was known for as a competitor who holds four Olympic medals and five Senior World Championship titles took a different tone as she focused on cross-training into her ninth month.

“I was doing a lot through the whole pregnancy, actually,” Zagunis said. “I wasn’t doing as much on the fencing side as things went on, but I was doing a lot of cross-training and I think that it helped my pregnancy go smoothly.”

A top elite competitor since her teenage years when she qualified for her first Senior World Team at just 15 years old, Zagunis’ pregnancy would lead into her longest break from training ever – an experience she would relish.

On Oct. 13, Zagunis and her husband, Mike Swehla, welcomed their daughter, Sunday Noelle Swehla, to the world and she credited her training regimen with playing a role in making the delivery process easier.

“I know that everybody’s experience is different and some people can’t work out or be active during a pregnancy, so I was very fortunate for that,” she said. “But I think it helped a lot with my labor and I was able to do it completely naturally and I think that being an athlete and being competitive and in shape throughout my pregnancy helped too.”

Zagunis found herself in new territory when she returned to training after giving birth, but was up to the challenge.

“I don’t know if it’s taboo, but people don’t really talk about how hard it is post-partum,” Zagunis said. “I couldn’t do as much post-partum as I could when I was eight or nine months pregnant in terms of physical workouts. I had to talk to my doctor about that and I was kind of frustrated because I was so used to being able to do everything that I want to do and she was like ‘you have to give yourself some credit and your body went through something very intense and very traumatic.’”

Although the return to training had difficult moments, Zagunis said it also gave her a new appreciation for each of the new benchmarks she would reach.

“It was really difficult afterwards to kind of slow myself down because I wasn’t used to not being able to do things. I’d go to the gym and I’d be like ‘I can’t even do 10 sit-ups. I’m used to doing an entire 45-minute core workout and right now I can’t even do 10 sit-ups?’’ Zagunis said. “But it was even more motivating to see that improvement grow exponentially. Now, I can see myself getting back into shape whereas before, when you’re always in shape, it’s harder to see changes and now you can really see those results paying off much quicker.”

Nearly a year to the day of her last competition at the Seoul Grand Prix, Zagunis boarded a plane to return to Seoul – a city she has traveled to three times in the past on the international circuit.

Only this time she would be going as not just a competitor, but as a mother.

Not only would Zagunis have the traditional worries of an athlete – a 16-hour time zone change and a field of Olympic and World medalists to face with a stack of world ranking points on the line – but she also had a five-month old daughter who was the new owner of her first passport.

She wouldn’t be alone, though. Far from it.

Her husband, Mike, came to the Grand Prix as well as her mother, Cathy Zagunis – herself an Olympian who represented Team USA on the 1976 rowing team. A familiar face on the circuit for years, Cathy would assist the first-time parents with caring for Sunday throughout the three-day event.

“We kind of wanted to make it a fun trip. Of course, Sunday won’t remember any of it, but we’ll have those memories with her. And I wanted to bring everybody along to make it more of a family affair and make it more relaxed for myself,” Zagunis said before laughing at the notion of finding traveling with an infant at a world-class competition to be relaxing. “I don’t know if traveling with a five-month-old across the world is really relaxing, but I just wanted to make it a little lighter and a little more fun because usually when I go to competitions I’m very serious and focused. And I took this seriously and focused, but I also wanted to have the experience of traveling with my family and bringing everybody along.”

Although she knew the fencing community would be watching her return, Zagunis was careful not to set specific expectations.

“Having it be my first one back, I didn’t want to put too much pressure on myself. It was going to be a real, true benchmark of where I am because I’d been working really, really hard at home, but, of course, when you get to competition and I hadn’t competed in a year I might think that I’m feeling really good, but I wasn’t sure exactly how it would go,” Zagunis said.

Despite a pair of top-eight results during her final two tournaments in 2017, Zagunis found herself out of a top-16 world ranking for the first time in over a decade and would need to fence the pool and preliminary rounds in order to make the table of 64 and the second day of competition.

“I’ve never liked five-touch bouts because anything can happen and you get one unlucky touch, one bad call and then the bout is over too quickly,” Zagunis said. “I can see how it can throw you off, but I was happy to get through them and to the 15-touch rounds because, obviously I’m more comfortable there. But that’s one of the things I need to work on before Moscow is to get myself more mentally prepared.”

Zagunis made it through pools and won the direct elimination bout she needed to make the second day. With a day in between the pools and preliminary rounds, Zagunis returned to the table of 64 on April 1 and finished the day with a 3-1 record and an eighth-place finish, defeating Senior World medalists Irene Vecchi (ITA) and Manon Brunet (FRA) in the process and matching her top-eight result from the 2017 Seoul Grand Prix

With her first competition in the books, Zagunis has officially resumed her quest to qualify for a fifth Olympic Games in Tokyo.

The next step on that journey will come in Richmond on April 22 when Zagunis will fence at her first Division I National Championships since 2008.

“I’m actually really excited to compete at the national level, especially after seeing how well Seoul went for me,” Zagunis said. “I’m just excited to have more tournament experience because it’s important to get back into it mentally as well as physically. I’m really looking forward to it because I have a lot to prove in this comeback and I’m excited to show the U.S people what I’ve got just like I did with the international scene.”

With four Olympic Games and four Olympic medals on her resume, Zagunis said her daughter has given her a new sense of focus as she prepares for the two years leading up to Tokyo.

“Now I have new motivation – doing this for my daughter and trying to make that work. It’s something I’ve never navigated before and it’s going to be a very interesting two and a half years, but I’m excited for the journey,” Zagunis said. “I’m really excited to go to my next Olympics with her to show that anything is possible. If you put your mind to it, you can make your dreams come true. It would be a really awesome experience to have with her and our entire family and to be able to tell her some day that I went to all these Olympics and then had her and we did it together.”