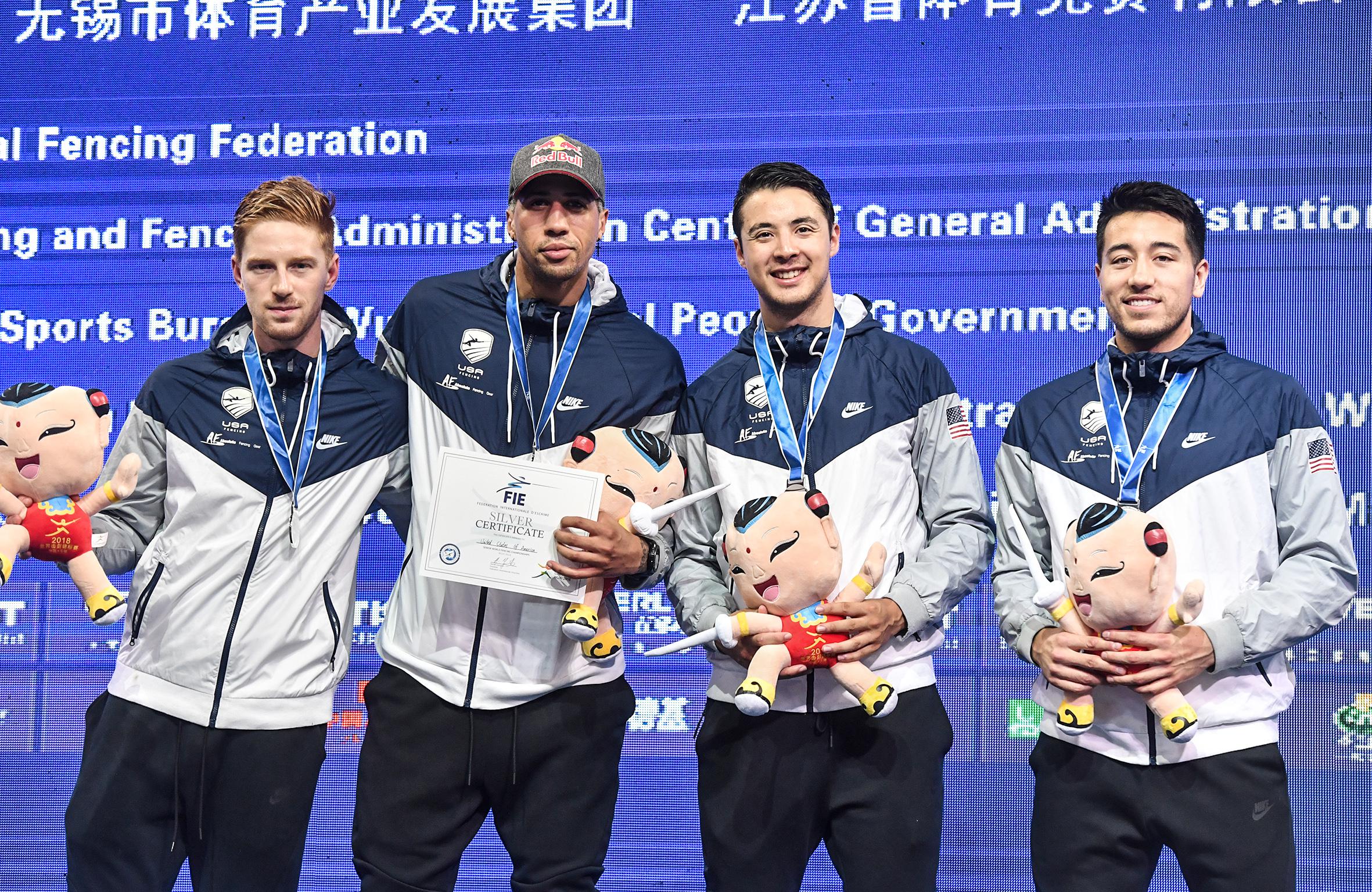 (Wuxi, China) – On the final day of competition at the Senior World Championships, the U.S. Men’s Foil Team concluded Team USA’s most successful Senior Worlds in history with a silver medal.

The podium finish is the seventh straight medal this season for the U.S. Men’s Foil Team who won gold in the first five World Cups of the season as well as the Pan American Championships. Team USA’s silver medal also guarantees that the men’s foil squad will return the Overall World Cup title to the United States for the second time in three years.

The previous record of five medals was set at the 2015 Senior World Championships in the final Worlds before the Rio Olympic Games where the U.S. team won medals in four events.

In the round of eight against China, Massialas led the team in scoring, outtouching his opponents, 15-1, for a +14 indicator in three bouts. Imboden and Chamley-Watson each earned +6 indicators to complete a 45-19 win.

In a rematch of the 2017 Senior World Championships final in which Team USA took silver behind Italy, the Americans stayed within a touch at 20-19, but the Italians won or tied the next five bouts for a 45-34 victory.

“I think we were just a little tight. We fenced so well against Russia and against Italy we just didn’t really get into our full flow and it was probably one of our worst outings, but it’s also something we need to overcome as we get ready for Tokyo,” said Head Coach Greg Massialas (San Francisco, Calif.) “The reality is we’ve finished No. 1 in the world for three of the last six years. We’ve gotten medals in the World Championships or Olympics in four of the last six years and the big goal is Tokyo. That’s what we want to be ready for.”

In the quarter-finals, Team USA fenced Russia – the reigning Olympic Champions and a team whose starts were gold, silver and bronze medalists in the individual event on Tuesday. The Americans weren’t intimidated by the lineup and Zagunis pushed the squad to a 30-29 lead, scoring 17 touches with a +9 indicator.

Stone, who won bronze in the individual event as the lone American on the podium, bested World Champion Sofia Pozdniakova, 5-3, in a rematch of their semifinal to give Team USA a 35-32 lead. Wozniak fenced well against Yana Egorian, the reigning Olympic Champion and a bronze medalist in this year’s individual event, holding Egorian to six touches as the Russian fought to steal the lead. Zagunis went into the anchor leg with a 40-38 lead, but Sofia Velikaya, the 2018 Senior World and 2016 Olympic silver medalist, was on a mission to return to the podium and finished the bout with a 45-42 win for Russia.

In the 5th – 8th place table, the Americans fenced a Hungarian team led by former World No. 1 Anna Marton. With Hungary leading the match, 20-11, Stone outscored Marton, 12-5, to cut Hungary’s lead to 25-23. Zagunis bested two-time reigning Cadet World Champion Liza Pusztai, 7-3, to give Team USA a 30-28 lead. Wozniak also scored a key win over Pusztai at 7-3 in the setup bout before Zagunis closed the match against Marton, 5-3, for a 45-41 match win.

The match for fifth place would pit Team USA against Ukraine in a battle between the two squads that won silver and bronze in Rio. Zagunis led the team with a +13 indicator as both she and Fox-Gitomer earned victories over World No. 1 Olga Kharlan. Fox-Gitomer opened the match with a 5-2 win over Kharlan and Zagunis defeated the four-time Olympic medalist, 5-1, to take the win, 45-34.