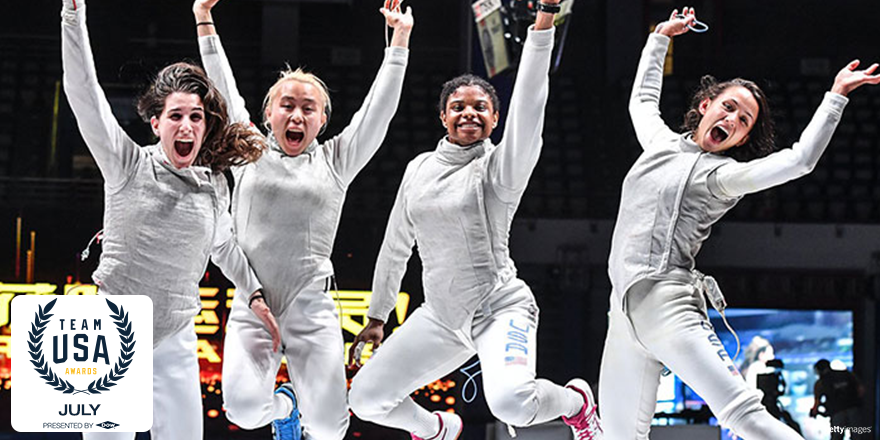 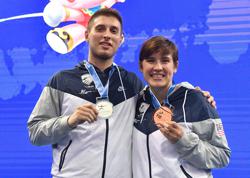 (Colorado Springs) – USA Fencing swept the Best of July honors for the Team USA Awards presented by Dow for the first time in history as Eli Dershwitz (Sherborn, Mass.), Courtney Hurley (Houston, Texas) and the U.S. Women’s Foil team each brought home the honors after record-breaking performances at the Senior World Championships in Wuxi, China.

Capping off a career season with the silver in Wuxi, Dershwitz claimed just the second medal in U.S. men’s saber at a World Championships. As a result, the senior at Harvard secured the No. 1 position in the FIE World Rankings and became the first Overall World Cup Champion in the history of U.S. men’s saber.

Coming out on top in a category that included 23-time Grand Slam tennis champion Serena Williams as well as formidable athletes in swimming, shooting and paratriathlon, Hurley won bronze in women’s épée, inserting her name into the USA Fencing record books as the first U.S. fencer – male or female – to stand on the podium in the individual competition at Senior Worlds. Three days later, she played a key role in the team event where the women’s épée team not only won its first Senior World Championship medal, but brought home the gold.

The women’s foil team became the first American foil team – male or female – to win a World Championship title. After winning silver at the 2017 Worlds for the best result in U.S. women’s foil history, the squad made history for the second straight year with a 45-35 victory over Italy. Team USA – represented by Lee Kiefer (Lexington, Kentucky), Nicole Ross (New York City, N.Y.), Nzingha Prescod (Brooklyn, N.Y.) and Margaret Lu (Greenwich, Conn.) – upset an Italian team that has come away with gold at every Senior Worlds and Olympic Games except one since 2012.

Each month, each NGB can nominate one male, female and team for the Team USA Awards. NGB representatives and select media members count for 50 percent of the vote while public voting accounts for the other 50 percent.